ETOBICOKE, Ont.  – It only took about two minutes for Queen's University to catch Canada's National Women's Under-18 Team off guard and put a goal up on the scoreboard. But that's all the red and white would allow for the remainder of the game Sunday evening, with a shaky start turning into a strong 5-1 win in what was their first time playing together as a team. 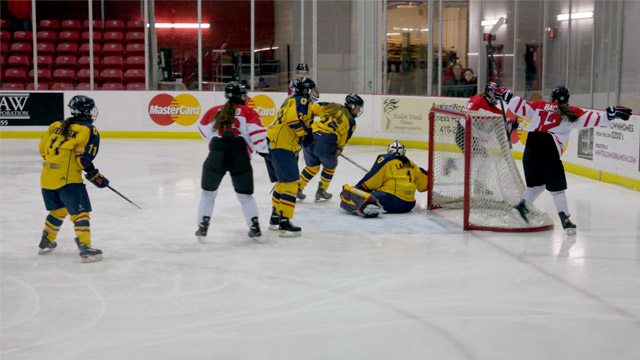 The exhibition match-up was hosted at the MasterCard Centre as part of Team Canada's pre-competition schedule before heading to Budapest, Hungary, for the 2014 IIHF Ice Hockey U18 Women's World Championship, taking place March 23-30.

Victoria Bach (Milton, Ont./Mississauga, Ont.) replied for Canada midway through the opening frame, with Sarah Potomak (Aldergrove, B.C./Pursuit of Excellence, Midget AAA) assisting, to keep it even at 1-1 going into the first intermission.

The two linemates combined to make it 2-1 at 18:10 of the second period, this time with Bach feeding Potomak on the power play. Eve-Audrey Picard (Longueuil, Que./St-Laurent, CEGEP) notched an unassisted marker at 12:05 in the middle frame to make it 3-1, and penalties continued to cost Queen's, with Team Canada returnee Hannah Miller (Vancouver, B.C./Okanagan Hockey Academy, JWHL) adding another goal with the advantage to close out the period with a 4-1 lead, on a Samantha Fieseler (Kelowna, B.C./Pursuit of Excellence, JWHL) helper.

Miller topped it off at 6:56, on an assist from Breanne Wilson-Bennett (Markham, Ont./Toronto, PWHL), to give Canada the win over the Canadian Interuniversity Sport (CIS) side. Kassidy Sauvé (Brooklin, Ont./Whitby, PWHL) and Shea Tiley (Shallow Lake, Ont./Waterloo, PWHL) split netminding duties for the under-18 women, turning away 14 pucks over three periods.

Canada's National Women's Under-18 Team takes on Japan in its first preliminary game at worlds Sunday, March 23, with the puck dropping at 6 p.m. local time/1 p.m. ET. Follow all the action from Budapest live at www.twitter.com/hc_women.